Here is another installment of my Harry Potter book reviews, still keeping the style a little bit different because it is so hard to review a book that so many people have read and love! Below is my review, plus a sneaky peak at the front cover and description and places to buy:

WARNING! THERE MAY BE SPOILERS SO READ ON WITH CAUTION! 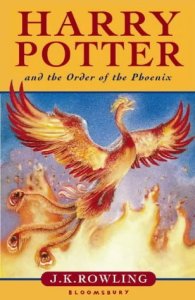 ‘Harry Potter and the Order of the Phoenix’ by J.K. Rowling

Harry Potter is due to start his fifth year at Hogwarts School of Witchcraft and Wizardry. His best friends Ron and Hermione have been very secretive all summer and he is desperate to get back to school and find out what has been going on. However, what Harry discovers is far more devastating than he could ever have expected…

Plot: After the return of Voldemort at the end of book number 4, everyone is buzzing around Hogwarts, unable to decide whether what the Ministry of Magic have said about Harry and Dumbledore are true, and whether Voldemort is now back among them. Harry experiences physical pain as well as emotional turmoil throughout the book, unknowing of what the Dark Lord’s plans for him are, only that he wants him dead. The Order of the Phoenix is an organisation formed to fight against He-Who-Shall-Not-Be-Named and protect Harry as best they can, while that proves difficult as the story goes on.

Favourite Character: I loved Tonks, even though she wasn’t one of the major characters, she was still part of the Order, and she just seemed so cool and relaxed. I also found that Sirius’ character had so much more emphasis put on him, which was a blessing and a curse. It showed me just how much he cared for Harry, and how he was technically the only family figure Harry could look up to. Though, as I began to care and feel for Sirius more throughout the book, I put myself in danger because of his fate at the end of the book (yes, I did cry… A lot!)

Least Favourite Character: Dolores Umbridge- Although she was not a Dark wizard, she was on the side of the Ministry, who were trying to fight against Dumbledore’s running of Hogwarts, and put the majority of students and teachers through hell. She particularly irritated me when she told Harry to not tell lies, when she had no solid proof herself that he was neither lying nor telling the truth.

Did the characters feel real: Yes- There were so any more characters in this book, introduced to us through the Order, and the rise of Voldemort and his Death Eaters, yet Rowling still kept all of them feeling as real as possible to me! It felt as though, even if it wasn’t written, each character had their own back story and a personal reason for being where they are today.

Favourite part of the book: Oh my goodness the battle in the Department of Mysteries was incredible, the whole chapter just blurred into one big fiasco, and it was so dramatic, but still amazingly well written!

Any particularly well written scenes: The scene after Sirius’ death was well articulated, because there was still a sense of battle reverberating through the atmosphere of around the Veil, yet Rowling still managed to covey the sadness and grief that members of the Order and Harry especially, were feeling at the moment when Sirius fell though. I think that’s probably why it was so sad, because the overwhelming sense of upset was lingering in the air, but the Death Eaters still continued to fight around Harry, who was obviously devastated he had just lost the only father like figure he had ever had since James (besides Dumbledore)

Did you laugh or cry whilst reading the book: I cried A LOT!! But there were times when I laughed as well. I think Rowling really gets the balance right, especially because it’s a book for children, of darker moments sprinkled with light humour and funny sarcastic comments, especially from the Weasley twins!

Was it a page turner:  I finished an almost 800 page book in 10 days, with a full time job and dance classes, I’m pretty satisfied that, onceI picked the book up, that was it! It was so hard to put back down again!

Did you learn anything: This book definitely go me interested in the different spells, charms and jinxes used in the books, not just this one, but the whole series!

Would I recommend it:  I would definitely recommend the whole series, but you have to really want to read them before committing yourself to this house brick of a book (I recommend, if you have an eReader, you might wanna read it on that, because hardback versions are really heavy!)

If you like the sound of the book, here is where you can buy the book (including, but not limited to):

I like books and tea. MA Children's Literature student.

5 replies on “Review of ‘Harry Potter and the Order of the Phoenix’ by J.K. Rowling”

Oh, if you cried in this one you just wait! 🙂 I love Harry Potter and I love seeing reviews from someone new to his world.

Haha, i have been warned about the last two books being sad! I’d seen the films, but never really understood them, but I’m loving the books, and it’s almost like a whole new story, like I had never seen the films before!

Great review. I love this series. Books #6 and #7 are amazing.

[…] book with magic- Harry Potter and the Order of the Phoenix, I’m not sure this needs much […]